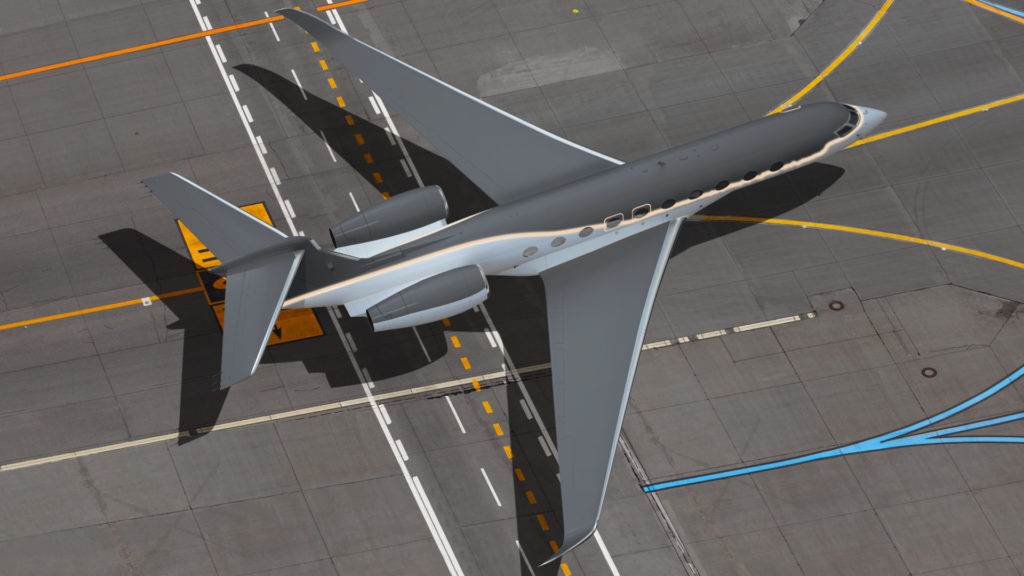 During these last months and year we have all seen a sky free of lines of condensations that crisscrossed drawn by planes. The sky was unusually empty from planes…

We could see an “untouched” sky of a uniform blue, shades of orange for sunsets, punctuated by white clouds or sometimes even sinking into the gray anthracite during storms.

This environment inspired M&R Associates Design and triggered the idea to create 3 exterior designs for the Gulfstream G700. Each of these would represent different states of the sky at a certain time of the day or type of weather.

The aircraft would always fully merge with the sky, but also sometimes would build a link between earth and sky, depending on the chosen concept.

Sunset between earth and sky, a first concept of aircraft exterior design

What could be more beautiful than a sunset where a few clouds capture the orange colors?  A design where the plane merges with the blue colour of the sky and some light clouds.

This aircraft exterior design also reflects the grey color of the tarmac on the ground along with an irregular orange line (remembering the orange clouds) and off-white gradation tracing the horizon.

Ribbons of a light matte gray envelop the plane like thick, flowing clouds in a cloudy sky. The curves are underlined by thin blue-gray lines identical to the one on the low side of the fuselage.

The G700 by M&R fully merges with its natural environment up to a point of becoming almost stealth. Designing exterior aircraft means offering a flying experience that begins as soon as the aircraft is discovered.

Here is the G700, an M&R Associates Design aircraft project in a threatening environment.

This creation shows a heavy, charged and electric sky in the dark bluish gray where the broken golden lines of the storm’s lightning stand out by design exterior aircraft this way.

The ”storm” line also separates the 2 grey colors on the fuselage which also accentuates this drastic environment.

The general idea of this exterior design paint scheme is both very graphic and detailed. It is also a global artistic vision of human relationships during this period of life.

The general design of patterns and stripes are inspired by technical elements characterizing the Gulfstream G700, such as the windows or the winglets. It also visually increases the length of the aircraft. The reading of these oval gradient patterns have to be seen starting from the center of the airplane either backwards or forwards.

In addition, the variations of dark greens going towards the light greens symbolize the life, the nature, the renewal, with an idea and a positive general message in direction of the nose of the airplane of “Back to Future”.

This paint designing exterior airplane can be adapted in a more “racer” version in gray / charcoal or more “soft” in beige / brown colors. We can select different colour themes  either “earth – brown” or “vegetation – green” as per the illustrations.

We use cookies on our website to give you the most relevant experience by remembering your preferences and repeat visits. By clicking “Accept All”, you consent to the use of ALL the cookies. However, you may visit "Cookie Settings" to provide a controlled consent.
Cookie SettingsAccept All
Manage consent

This website uses cookies to improve your experience while you navigate through the website. Out of these, the cookies that are categorized as necessary are stored on your browser as they are essential for the working of basic functionalities of the website. We also use third-party cookies that help us analyze and understand how you use this website. These cookies will be stored in your browser only with your consent. You also have the option to opt-out of these cookies. But opting out of some of these cookies may affect your browsing experience.
Necessary Always Enabled
Necessary cookies are absolutely essential for the website to function properly. These cookies ensure basic functionalities and security features of the website, anonymously.
Functional
Functional cookies help to perform certain functionalities like sharing the content of the website on social media platforms, collect feedbacks, and other third-party features.
Performance
Performance cookies are used to understand and analyze the key performance indexes of the website which helps in delivering a better user experience for the visitors.
Analytics
Analytical cookies are used to understand how visitors interact with the website. These cookies help provide information on metrics the number of visitors, bounce rate, traffic source, etc.
Advertisement
Advertisement cookies are used to provide visitors with relevant ads and marketing campaigns. These cookies track visitors across websites and collect information to provide customized ads.
Others
Other uncategorized cookies are those that are being analyzed and have not been classified into a category as yet.
SAVE & ACCEPT